This work evaluated the potential of a volatile oil extracted from Syagrus coronata seeds for the control of Aedes aegypti. The oil was extracted by hydrodistillation, characterized by gas chromatography-mass spectrometry (GC-MS), and evaluated for larvicidal and ovicidal activities, as well as for influence on the choice of oviposition site by females. The effects of the oil on swimming activity of larvae were also investigated. The oil extraction showed a yield of 0.41% and GC-MS revealed that 98.42% of the composition corresponded to the following fatty acids: octanoic acid (40.55%), decanoic acid (17.39%) and dodecanoic acid (40.48%). The oil promoted the death of A. aegypti larvae, with LC50 of 21.07 ppm, but had no ovicidal action. The octanoic, decanoid and dodecanoic acids showed larvicidal activity with LC50 of 51.78, 24.01 and 19.72 ppm, respectively. The swimming activity of larvae incubated with the oil during 1 and 3 h was significantly (p < 0.05) lower than that of control (0.2% Tween 80, v/v) larvae. The S. coronata oil and the octanoic acid (both at 50 ppm) showed a deterrent effect on oviposition. In conclusion, the essential oil of S. coronata seed was able to promote death of A. aegypti larvae and exerted a deterrent effect on pregnant females. The results indicated that the larvicidal activity is due to the action of decanoic and dodecanoic acids while the oviposition deterrent effect is probably linked to the presence of octanoic acid. 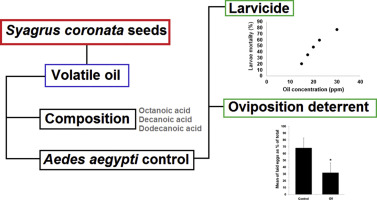