In neurons, stromal interaction molecule (STIM) proteins regulate store-operated Ca2+ entry (SOCE) and are involved in calcium signaling pathways. However, STIM activity in neurological diseases is unclear and should be clarified by studies that are performed in vivo rather than in cultured cells in vitro. The present study investigated the role of neuronal Stim2b protein in zebrafish. We generated stim2b knockout zebrafish, which were fertile and had a regular lifespan. Using various behavioral tests, we found that stim2b−/− zebrafish larvae were hyperactive compared with wild-type fish. The mutants exhibited increases in mobility and thigmotaxis and disruptions of phototaxis. They were also more sensitive to pentylenetetrazol and glutamate treatments. Using lightsheet microscopy, a higher average oscillation frequency and higher average amplitude of neuronal Ca2+ oscillations were observed in stim2b−/− larvae. RNA sequencing detected upregulation of the annexin 3a and gpr39 genes and downregulation of the rrm2, neuroguidin, and homer2 genes. The latter gene encodes a protein that is involved in several processes that are involved in Ca2+ homeostasis in neurons, including metabotropic glutamate receptors. We propose that Stim2b deficiency in neurons dysregulates SOCE and triggers changes in gene expression, thereby causing abnormal behavior, such as hyperactivity and susceptibility to seizures. View Full-Text
Keywords: Stim2b; zebrafish; behavior; in vivo imaging; calcium; GCaMP5G; seizures 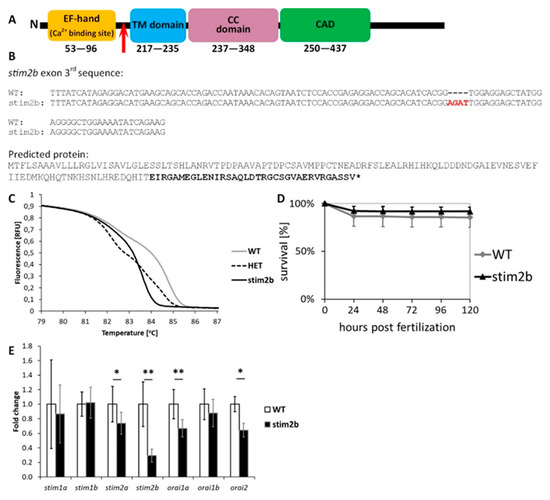